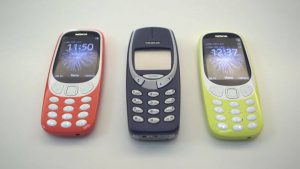 The Nokia 3310 phone was one of the most durable and widely used phones in it's day. To say that it is "coming back from the dead" would be misleading because the phone was so unbreakable that it never could have possibly died!

The original 3310 was very popular at the same time as the Y2K bug was thought to end humanity as we know it. Now Nokia has announced plans to release a new version of the classic mobile phone.

Nokia say that the new version will be a very simple device. You will be able to make phone calls and send/receive text messages.

For those of us who remember having our own 3310 in the noughties, you will also remember the iconic Snake game that came with the phone. Nokia have said that the new device will ship with Snake so we can waste time chasing our tail and reminisce about how we used to waste our time in a similar way over 15 years ago.